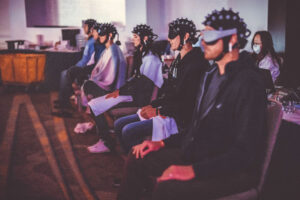 In San Diego we launched two large studies, one standalone and the other encompassing three related investigations. The standalone study, named IMAGINE (Integrating MAGnetic Imaging with rich pheNotypE) will be the first study using Dr. Joe Dispenza’s meditations to integrate functional magnetic resonance imaging (fMRI) with qEEG, biometrics, blood work, and health surveys. As Dr. Joe says, ”Where you put your attention is where you put your energy.” The fMRI will allow us to assess brain structures and see which deep regions of the brain are using energy during a meditation. Coupling this with all of the other phenotypic measures will give us a complete picture of what happens to mind and body during the week. We recruited 20 individuals into IMAGINE, with roughly half novice and half experienced meditators. It was a marathon to do fMRI on these individuals in the pre- and post-setting as each scan takes about 60 minutes. We received word back from the fMRI center that we were the first group ever to pull off so many scans in such a short time window. Individuals in IMAGINE describe some amazing experiences, and we look forward to seeing what insights the data shows.

The other study initiated in San Diego was named GENESIS (GEnerating NEw inSights into genetIc Signatures) which is composed of three interrelated studies (Twins, Milk, and Genes) which probe how we as humans are connected and the power of the intentional mind. For “Twins,” six pairs of twins were recruited (5 identical and one fraternal) and were phenotyped before and after the event as well as during. For the study, the twins were separated during the event, and while one was meditating, the other was listening to a long and tedious documentary. We wanted to determine if the twin meditating and having an intense emotional experience could in some way influence the twin listening to the documentary in a different room. “Milk” will start looking at the mother-child relationship to see what happens to the breast milk of a mother who meditates. Lots of evidence suggests there are protective factors elevated in breast milk that provide health resiliency to the breastfeeding child. This study will look to see if meditation could also impact breast milk. The third component, “Genes” was an intention-based experiment where two groups were taught about cell/molecular biology and were then given 5 gene targets to focus their intention on for the week and try to change the expression. All participants focused on SERPINA5 which past studies have shown to be elevated in meditators and protective against SARS-CoV-2 infection. The experimental group focused on 4 additional, real genes while the control group focuses on non-real targets. The outcome of GENESIS will allow us to determine if humans can form close and distant connections with each other and the power of the mind through intention to regulate the very core of our genetics. Insights will be critical in evolving our understanding of healing and transformation that many people experience at these events.

Research Presentation: An Update on QUANTUM 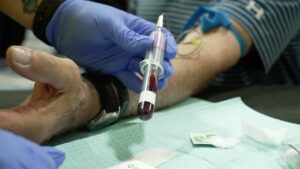 The research presentation at the retreat focused on new findings around SARS-CoV-2 and initial insights from the QUANTUM Study launched in January 2022 in Marco Island. The SARS-CoV-2 paper has been slow going as additional information was needed to complete the story. This is now done and the study will be submitted to a peer-reviewed journal for consideration. The final studies suggest that meditation and vaccination work in different and complementary ways to limit SARS-CoV-2 infection and Covid-19 disease. The QUANTUM initial analysis shows the participant pool includes 978 individuals and at least 18 diseases represented where there were 30 or more individuals represented. Sadly, but expected, nearly 1/3 of QUANTUM participants list anxiety/depression as a disease, which gives us some insights into where to focus future research efforts.

As cancer research is our focus in 2022, we looked at the 42 participants in QUANTUM who have cancer (breast cancer was the most predominant) and these were age/sex matched to healthy participants in QUANTUM. Metagenomic analysis of microbiomes revealed that in seven days, the microbiome of cancer subjects looks more like healthy individuals. The main changes were seen in populations of bacteria regulating inflammation. Importantly, these biological changes were in line with self-reported aspects of improved health. Metabolic processes were also assessed and impacted by meditation in cancer patients. We look forward to another study on cancer later in the year, as well as developing deeper insights into other diseases represented in the QUANTUM study.

Thank you for your support of InnerScience, which allows for this groundbreaking research; we are excited at the limitless possibilities that exist to empower, heal, and allow every individual to thrive.

Our groundbreaking research is showing ordinary people doing the extraordinary — changing their physiology, changing their biological markers, and changing their lives — not with a pill, but with the power of meditation.

We think the implications can change the world, and we invite you to become a catalyst for change by joining our community of recurring donors.

Join Us
We use cookies on our website to give you the most relevant experience by remembering your preferences and repeat visits. By clicking “Accept”, you consent to the use of ALL the cookies.
Do not sell my personal information.
Cookie Settings Accept
Manage consent

This website uses cookies to improve your experience while you navigate through the website. Out of these, the cookies that are categorized as necessary are stored on your browser as they are essential for the working of basic functionalities of the website. We also use third-party cookies that help us analyze and understand how you use this website. These cookies will be stored in your browser only with your consent. You also have the option to opt-out of these cookies. But opting out of some of these cookies may affect your browsing experience.
Necessary Always Enabled
Necessary cookies are absolutely essential for the website to function properly. These cookies ensure basic functionalities and security features of the website, anonymously.
Functional
Functional cookies help to perform certain functionalities like sharing the content of the website on social media platforms, collect feedbacks, and other third-party features.
Performance
Performance cookies are used to understand and analyze the key performance indexes of the website which helps in delivering a better user experience for the visitors.
Analytics
Analytical cookies are used to understand how visitors interact with the website. These cookies help provide information on metrics the number of visitors, bounce rate, traffic source, etc.
Advertisement
Advertisement cookies are used to provide visitors with relevant ads and marketing campaigns. These cookies track visitors across websites and collect information to provide customized ads.
Others
Other uncategorized cookies are those that are being analyzed and have not been classified into a category as yet.
Save & Accept